Love to Ballarat.Watching the brave survivors from Ballarat exhausted after their travels and the ordeal of having to sit and watch George Pell’s unfeeling and cold performance for the Royal Commission, I cannot help but point out the almost identical experiences of 2010 when we also were in Rome. 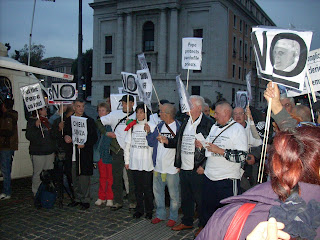 The same scenario, brave survivors, this time    from 14 different countries, including seventy of the deaf and speech impaired survivors of clergy abuse form Verona in Italy.
Lots of reporters, TV cameras, interviews,multiple gatherings, laughter,tears,anger,despair, hope-and all of the other extreme emotions that come with this sort of occasion. 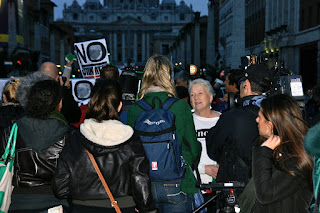 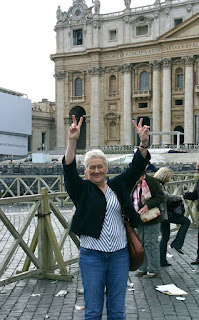 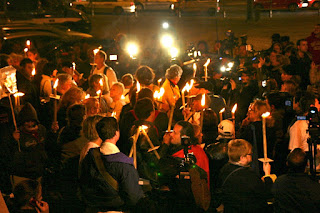 We met in Castel Saint Angelo opposite the vatican (they would not let us into vatican square because we were wearing Survivor’s Voice teeshirts!) We lit candles and we sang,  we shared our pain and our determination. 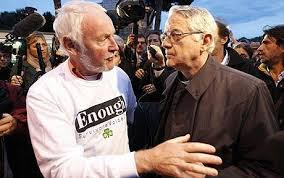 Frederico Lombardi (papal spokesperson) slithered out of his hole saying he wanted to “address the meeting”! He said he had seen us out of his window, and decided to come out (Armed with two A four sheets of prepared speech that presumably fell into his hands as he came over) We refused to let him speak, we were there for each other not the church or it’s spin. So he scuttled back under his rock after refusing to answer questions by the journalists there and then being heckled.
We danced and we marched, some of us were arrested and had passports removed, some were “allowed” only in to the square with teeshirts covered up and in pairs. Some of us left stones in the square from our gardens at home and our names on, they were swept away pretty bloody quickly!
A few of us  were then ushered into Lombardi’s office, where he arrived to take  centre stage, he sat in a chair  raised higher than ours (usual disrespect) hardly spoke, NEVER listened and was clearly there only so that the next day he could report in the vatican news that he had a “meeting” with survivors- absolute crap!  The few words he deigned to utter were patronising and ill informed, he suggested, (as he did similarly this week with the Ballarat survivors) that we should all “work together to stamp out pornography in all of the other churches “WTF!
Gary  told him that he was  clearly “wasting our time”, that we had come to party with each other and would prefer to get on with it! I suspect he was pleased to get rid of us, his PR stunt had served his purpose.
As it happens, one of us  “accidentally” left their phone on “record” and we still can hear the ludicrous and useless dialogue, sometimes we have played it back for fun and just to remind us what a creep he really is!
This week Lombardi  are saying it was a “healing experience” in Rome , they had the audacity to praise Pell and the film  “Spotlight” (in the same sentence!! WT double F!)  I have always been so amazed at how they can turn their obvious humiliation into a victory! Taking credit for things they had no part in,  apart from being the  cause of all the pain. Even more amazed that still some people believe a word they say!!
There is another film I would like to draw attention to, BASTA by Gary Bergeron, which shows his and Bernie McDaid’s journey ten years earlier to Rome, where they too encountered messages “not received” “pope unaware” “fax’s not working” – same shit different day!
This week in Rome felt like an action “replay”!
And  here is the thing : In all that time and with numerous groups of survivors going to Rome – NOTHING about the church has changed!!! NOTHING that has been promised has ever materialised!!  NOTHING has altered their disregard and obvious contempt for those  who’s lives were destroyed.
BUT We have  changed!!
We KNOW who they are – we have seen their dark underbelly  and power mania and have turned our backs on them!
Because Here is the thing ! THEY DON”T GIVE A SHIT!!! They are narcissists and will always use and abuse anyone who challenges them. They are INCAPABLE of change. Anyone who goes there expecting integrity will be put into the role of supplicant or beggar and they will be used  for PR fodder. 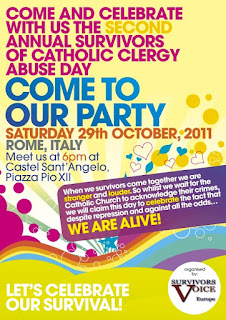 We have been back several times to Rome, but never again to seek anything from them, or to protest-  but to PARTY! To dance in front of the vatican-  to celebrate our survival and our connections, and to show them that we have survived despite them – and to spite them. 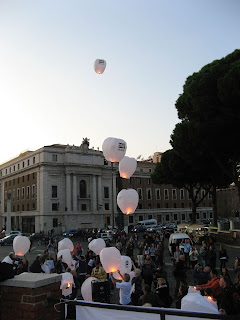 We have been several  times to Verona and there we party with those survivors in Italy who STILL have received NO justice.Despite their story being put into the pope’s hands directly! 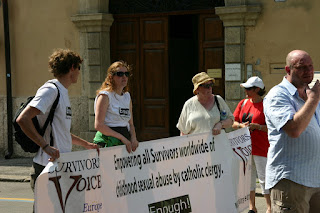 I send my love and admiration to Ballarat but I do hope they know that  Pell, the vatican, will say anything to gain publicity out of them, and then very quickly get them off their backs! Their false tears and feigned sorrow is obscene.
When it comes to MAKING AMENDS for their crimes they will do as little as they can get away with, NEVER as much as they could do.They will offer patronising crumbs- and then  They will do NOTHING!
We have to take care of ourselves and each other!