Double Cross: The Code of the Catholic Church 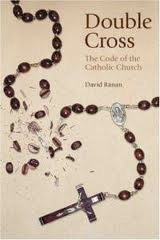 I’ve never given the Catholic Church much credit, but I had absolutely NO idea what a thoroughly vile institution it really was until political scientist, David Ranan booted open its unholy doors for me with his book Double Cross: The Code of the Catholic Church. This is not a book, it’s an incendiary device!

You can just hear the Catholic Taliban now, can’t you…? ‘Oh, but you mustn’t let it blind you to all the good the Church does’. Put it this way… With almost 500 pages of bad stuff — and I mean BAD — it would have to be very good! The new blasphemy law prohibiting “publication or utterance of blasphemous matter” in Ireland and the Offensive Behaviour at Football and Threatening Communications (Scotland) Bill might be coming about in just the nick of time to help save this Church’s sorry arse from the sort of criticism this book could unleash!

Even the Catholic Herald described the book as ‘salutary’ after the reviewer checked the references and had to admit, rather drily, that “they proved satisfactory”.

Ranan digs deep. Very deep. Reminding us the Catholic Church’s own rule about all the Popes — the ‘successors of Peter’ — being culpable, he reveals the ones guilty of nepotism, murder, sexual debauchery and general depravity, none of whom the Church has officially condemned. There are the ones who took lovers, mistresses, girls or boys, married, had illegitimate children and housed and promoted their, er… ‘nephews’ (many of them had children). Pope Julius III hardly made much of a secret about the teenage boy he picked up in the street. First he was his ‘monkey keeper’ and then he was made a Cardinal).

My goodness, I was only into the first chapters, and had no idea Ranan was just warming up! He then goes on to expose the gun-running, the financial wheeling and dealing, the laundering of illegal funds, the deals with the Mafia and the administration of the Nazi rat-runs. Oh, yes… You didn’t even need to be a Catholic to get Vatican help here: Just a Nazi. Twenty Catholic agencies helped spirit away the likes of the commander of Treblinka, Franz Strangl who murdered 900,000 people; deputy commander of Sobibor, Gustav Wagner who murdered 250,000 Jews and Adolf Eichmann amongst many, many others. All that before you’re reading another chapter about some of the endless cases of child abuse the Catholic Church tried to cover up, often blackmailing its victims into silence.

It comes as no surprise to find this Church’s copybook blotted by an historical hatred of Jews, passing laws that closed professions to them, locking them up in ghettos and forcing them to wear yellow identification. Add to that the inquisitions, enforced conversions, slave trading and operations of torture and you are left — by the time you’ve read the last page — either needing counselling or wondering what kind of twisted mind would ever want to associate itself with such a poisonous institution. Of course, I’m reminded that ‘Catholics’ are born into this religion, often forced into their schools and don’t have much choice. This is why I salute every one of them that finds the courage to speak out against the Vatican.

With copious media coverage for Catholic spokesmen promoting the idea that sectarianism found at ‘Old Firm’ matches is a direct attack on religion I’ve no doubt they’d be quite happy to see Catholicism becoming quite chic on the football terraces this season. But still, having read David Ranan’s book, I think I’d rather Celtic fans sing the praises of the IRA than be so offensive as to be seen making the sign of the cross!

Born in Peckham, London, Garry Otton first worked for Gay News, a fortnightly newspaper produced under the editorship of Denis Lemon. The newspaper was dragged into the courts in 1974 when an attempt was made to proclaim a cover of two men kissing obscene and again in 1977 when Mary Whitehouse embarked on her crusade to sue the newspaper for blasphemy for printing a poem by Professor James Kirkup called The Love That Dares To Speak Its Name which described the sexual feelings of a Roman centurion for Christ on the cross. She won.

Garry also helped set up Gay Weekly, the nations first weekly gay newspaper and continued to contribute to gay publications before moving to Amsterdam. When he returned to England he began writing and illustrating short stories for magazines before being signed up by an international agent. During the eighties, as an NUJ member and using the name Garry Cobb, his illustrations appeared in magazines across nine countries and in dozens of magazines throughout Britain.