Documentary film ‘The Silence’ by Tom Curran and Mark Truhan.
The film ‘The Silence’ tells about the sexual abuse of Yu’pik eskimo children in a far corner of Alaska. In their remote and isolated village, the children of Saint Michael were surrendered to the perverted lust of the local parish priest, father George Endal and his (acting as) deacon Joseph Lundowski. Literally a whole generation of boys and girls of this community became victims of these two and other predators.

It has become an impressive and heart-shattering story of the isolation and successive dramas which have scarred these children’s lives. It made me cry for hours and left me feeling intensely touched and hurt, but I recommend this film to everyone because it, once more, documents how the plague of clergy child abuse spread to the most remote places of our world and the mechanics of the catholic church to deny, lie and cover-up for these criminals.
Ton Leerschool
Survivors Voice Europe 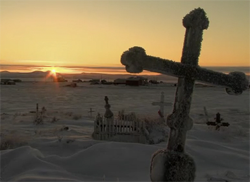 Introduction
FRONTLINE reveals a little-known chapter of the Catholic Church sex abuse story: decades of abuse of Native Americans by priests and other church workers in Alaska.

In The Silence, FRONTLINE producer Tom Curran and reporter Mark Trahant examine the legacy of abuse by a number of men who worked for the Catholic Church along Alaska’s far west coast in the late 1960s and early 1970s. They would leave behind a trail of hundreds of claims of abuse, making this one of the hardest hit regions in the country.

“I’m still having nightmares of Joseph Lundowski molesting, having sex with me,” says Peter “Packy” Kobuk. “I get up sweating, angry, feel like I could hurt somebody, but I never meaned [sic] to get angry at my children, but the anger went on my children also.”

“This was 1970,” says Anchorage attorney Ken Roosa, who represented the Alaska victims in a class action lawsuit against the church. “It was absolutely unthinkable that the Catholic Church could be involved in the sexual abuse of children. There was nowhere for the kids to hide. There was no one they could talk to. The adults believed the abusers over their own children. It was a perfect storm for molestation.”

As part of the church’s class action settlement with the victims, the bishop of Fairbanks, Donald Kettler, was asked to do something that no other bishop in the country had done on this scale: return to all of the villages where the abuse occurred and apologize to the victims in person. In December 2010, FRONTLINE gained unique access to Bishop Kettler’s visit to the village of St. Michael — frequently referred to as “ground zero” for the abuse — where the bishop would come face-to-face with the reality of the abuse that the church had refused to acknowledge for years.

“In St. Michael, we’ve had a great deal of our sexual abuse happen there,” Bishop Kettler tells FRONTLINE. “So I am certainly conscious of the importance of this visit. I’m anxious insofar as I’m wondering how I will be received. What will happen? What I can do?”

In the days before the bishop arrives, Elsie Boudreau, one of the first Alaska survivors to go public with her claims against the church, says: “I’ve seen how important it would be to have someone from the church say they’re sorry. The bishop has that power to reach that little kid and say, ‘It wasn’t your fault; you did nothing wrong.’ And I don’t know if he’s able to do that.”

To watch the full episode on FRONTLINE: click here