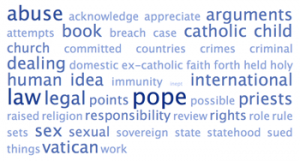 A major area in which the courts are arguably behind the times is that of the liability of local authorities for foster carers. At present there is no automatic (vicarious) liability on councils for abuse by their foster carers. A situation can exist whereby twins are taken into care and separated. Both are abused – one by a member of staff in a children’s home, the other by a foster parent. Only the child in residential care is able to obtain compensation but it can be argued that the council have the same duty to care for each child.

As a result of the case of Lister v Hesley Hall [2002] 1 AC local authorities are vicariously liable for the acts of their employees and the abuse of children in residential care. The situation is different for cases in which a foster carer abuses a child in foster care. In this situation there is no vicarious liability at present. This was decided as a matter of public policy in the case of S v Walsall Metropolitan Borough Council [1985] 1WLR. It was suggested that Local Authorities would adopt a cautionary attitude when seeking to place children in foster care if they were open to being sued. This was the rationale behind the X v Bedfordshire Case [1995] which was subsequently reversed in the case of JD v Berkshire [2006].

It has been argued that to impose vicarious liability in relation to foster care would harm the prospects for many thousands of children as local authorities could mothball the foster care system. This argument is at odds with one principle which lies behind the rationale for vicarious liability. Namely that it is designed to reduce the risk to potential victims by imposing responsibility on an employer/principal. In my view we will only advance and reduce the risks to children if we provide them with safer foster care placements.

Developments with the cases of Lister v Hesley Hall Ltd [2002] 1 AC and A v Hoare [2008] UKHL 6 have widened the scope of responsibility for vicarious liability of local authorities. The courts have signalled a willingness to improve the protection afforded to children by imposing new responsibilities on organisations caring for children.

Canada (Jacobi v Griffiths and Bazeley v Curry [1999] 2 SCR) has already imposed vicarious liability for foster carers on its local authorities. The ratio of the Canadian cases was the ‘enterprise risk’ principle which has recently been accepted in the case of Maga v Arch Diocese of Birmingham [2010] 1WLR where it was decided that a principal’s vicarious liability for his agent was also to be decided by looking at ‘whether the employer’s activity materially increased the risk of severe sexual assault and therefore harm’.

The forthcoming cases of JGE v Diocese of Portsmouth in the Court of Appeal and Various v Catholic Care Welfare Society [2010] ECWA CIV 256 (“the St Williams case”) in the Supreme Court are likely to shed light on the advancement of the principles of vicarious liability. In the case of JGE v Diocese of Portsmouth the relationship between the diocese and a priest is to be examined and whether this relationship can be the basis of vicarious liability is to be decided by the Court of Appeal.

In the St Williams case the House of Lords is due to decide the principles of vicarious liability as they apply to unincorporated associations. The Supreme Court is likely to draw together various principles which have to date been governed by vicarious liability in historic child abuse cases and it is hoped that the case will establish ‘inherent risk test’. This test could be as follows:

This would pave the way for re-examination of the S v Walsall decision of 1985 and would enable the imposition of vicarious liability of local authorities for foster carers.