Sue Cox, co-founder of Survivors Voice Europe spoke at the conference on secularism, organised by the National Secular Society at Conway Hall in London. 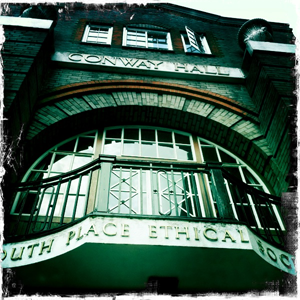 Once again we found ourselves in the midst of our friends at the secularist society in the Conway Hall in London on September 10th.
We are always so delighted to be part of their gatherings, they show us such warmth and support.
We had our new “banners”, our freshly printed posters and our own stall! I had been asked to say a few words in the afternoon.

Conway Hall has such a great history of speakers and activists and I always feel their energy still is in the building, it feels like years of thoughtful debate is etched into the walls somehow. The NSS staff, always on hand with practical help and welcome cups of coffee, we spent the day listening to some excellent speakers, each with their own particular passions, but all united in the one core belief that religious privileges have caused nothing but harm in the World and must be stopped.

The idea that secularists are “anti-religion ” is of course erroneous, in fact, secularists are clear that they would honour and fight for all discrimination to be fought against, protecting the rights of human beings regardless of their beliefs. What people choose to believe is not the issue, it is the ridiculous imbalance of power gained by people of religion which is an injustice and abhorrent to us all. The unelected bishops in the House of Lords, the religious discriminations in schools, the tax relief! The interference into politics by religious institutes, especially the vatican!
We, as survivors of catholic clergy abuse, of all people, are able to relate to that!
Having all been the victims of that tyrannical narcissistic regime called the vatican!

Here, where they create a culture where not only is child sexual abuse possible, it is almost inevitable.
A hotbed of lies and cover ups, a breeding ground for abuse which manages, in it’s own slippery fashion to ignore it’s responsibility towards the people it has harmed throughout it’s entire history.
It is the power that the vatican wields over people which is a continuation of the abuse, shifting between their perceived role as a sovereign state, where they claim all sorts of un earned privileges and immunities, to a religion where they manipulate the hearts and minds of people through indoctrination, and fear of hell fire and damnation.
They duck and dive between the two, depending on who they are trying to side step!

In the spirit which is open and “grown up” debate, the audience found it even possible to listen (without heckling !) to Baroness Warnock, who insensitively talked about the need to keep religion because of it’s beautiful buildings and music. I wondered if she would keep a rabid dog in her cupboard just because she might get lonely!

But the energy and positive attitudes prevailed, and the remaining speakers were inspiring, humorous and uplifting, despite talking about some serious issues, like education, child mutilation and women’s rights.

Our turn came,and I spoke of the birth of Survivors Voice which actually began, for me, when I was asked last year to take part in the pope protest. I talked about what a positive chain of events they had been part of, of our wonderful brave colleagues in Italy, Holland, America, and of our strengthening connections and bonds. And as always we were received with compassion and sincere regard, such a heartwarming feeling.

We made wonderful connections and met many new supporters and were so happy to invite everyone to our survivors celebration day in Rome in October, and were delighted to hear that some will try and be there. We were asked and happily agreed to give talks at various organisations, and came away knowing that the world is actually full of decent compassionate human beings and many of them were in Conway Hall that day!

Our main focus is, and always must remain, on the empowerment of the individual Survivor, and raising awareness of the issues of childhood clergy sexual abuse. It continues to be our “raison d’être” but when asked to take part in events that are in line with our own ethos, we are happy to stand and be counted, so we are looking forward to taking part in the march for a secular Europe through London next saturday, where we know we will be surrounded by the same like minded people, and reinforce our belief that after years of isolation and secrecy, it is our “connections” that make us strong.

We thank all from the day, and beyond, for their continued interest in our cause and their positive regard.
With Love, Sue