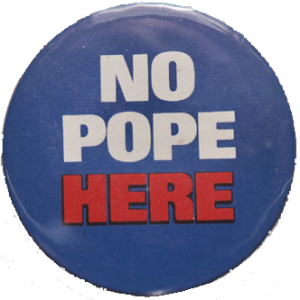 We have long hesitated whether or not to react to the euphoric media coverage of the election of the new pope. The media expect us to have an opinion, friends of our organisation expect us to react, often even our friends expect us to say something about it. Still we have been hesitant, but decided today to break the silence.
Reason? We have an opinion about this frenzy and would like to share it with our friends, let the world know about it…

The last couple of weeks many people from the media have asked us questions like:
“Who do you want the new pope to be?”
“What do you expect from the new pope?”
“Do you think that the new pope can restore the trust of Survivors?”
“Would you like to meet with the new pope to tell him of what happened to you?”

And our answers have always been the same, but have never been published:
“We don’t care who the next pope will be as we don’t expect any good from any representative of that organisation”.

“We recommend Survivors not to seek their healing with the church as there is a great chance of them being abused again, in the PR circus to help heal the increasing loss of face of the catholic church in general and many of their representatives in particular.”

We publish this opinion here, because we are getting more and more infuriated by the fact that the media, the politicians, the general public follow almost from hour to hour the theatrical rituals and procedures of the Roman clerics. That they get excited and are therefore contributing to the PR stunt that is being pulled off at the Vatican.
And at the same time, ignore and forget the hundreds of thousands of children worldwide, whose lives have been destroyed by catholic clerics with the full knowledge of those who are now proceeding in the election of the new pope…

That no action has been taken by any government or global organisation, neither diplomatic nor legal to call to account those responsible for the abuse or their defenders…

It is not our way to seek confrontation with the Vatican, because we know by our own experience of talks with them, that there is no desire from them to solve this issue with the Survivors in a decent, human way.
Contrary to what they preach!

But it is our way to seek healing for our friends Survivors!
A change in the public opinion and support from the general public would be healing for all of us.
To know that at least somebody cares…

So do think about this next time when you watch the news about the pope election.
These are not holy men. They committed or covered up and still cover up the worst crimes one can commit: to steal the innocence of a child to satisfy your own lust!

Help us and let others hear you when you say: