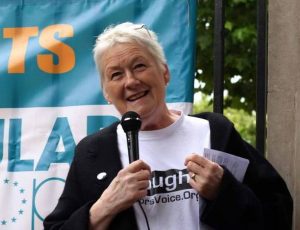 “I live in Warwickshire UK. and I am a 71 year old  grandmother, and Mother of six. I am a survivor of sexual abuse by a Catholic priest from ten years old until I was thirteen. The priest then hid behind his office, and the fact that my adopted  Mother, who had caught him in the act, was too “priest obsessed” to protect me  or seek justice on my   behalf. I  no longer  blame her, she was a product of her own upbringing , indoctrination and fearful religious delusions. But abuse left me as a child, with the legacy of alcoholism, addiction, serious self harming, eating disorder, fear, shame, guilt, unworthiness, inability to form relationships, trust anyone, feel anything more than an outcast, and on occasions be suicidal. I made made poor choices, and aged seventeen, and to get away from home, I married someone unsuitable and often very violent, aged 32 I was left alone with six children all under twelve.

I  have  fought back, dealing with each one of those  demons, and have  now worked in healthcare for nearly forty years. I am a traditional acupuncturist and addiction counsellor, I  run a very busy practice,  I also am the head a large and well respected teaching organisation SMART-UK, teaching in the UK’s National Health Service, Prison services  and the Military services, as well as abroad. Smart-UK has become the most reputable, ethical and professional organisation, and the training is much sought after. To date I have personally taught overy 16,000 health care professionals.

In 2010 I was amazed to  receive a “lifetime’s” achievement award for my contribution to the treatment of addiction.

My childhood rape at the hands of a priest, was the last piece of my own particular  puzzle, and the hardest one to face, it put my life on a path of self destruction, which has taken years to come to terms with. But I now feel empowered after finding others who have recovered, and speaking out,  showing my wounds.

Since finding my  “Survivor’s voice” after nearly fifty years, I have tried to  champion all those who have not yet been able to find theirs. Finding my friends in Survivors Voice Europe was life-changing.

I was asked to make the first speech to begin “protest The Pope’ rally in London in 2010, to 20,000 people, and  I was honoured to do so. I take part in many rallies, campaigns and debates and,  with my colleague Ton Leerschool was instrumental in the investigation into the holy see’s breaches of the conventions by the UN Committees for the Rights of the Child and The committee against torture which resulted in the  historic victory for survivors of their crimes.

I teach the neurobiology of abuse to healthcare workers, lawyers and  survivors in our collaborative workshop “Winning the Battle of the Abused Brain” because I know that EVERYONE should be made aware of the severity of clergy abuse.

I am an Atheist, Humanist,  and Secularist. I feel very strongly that we cannot look at the issues of clergy abuse without also looking at the environment in which they occurred.The catholic church provides a breeding ground for toxic abuses.

I am in positive  awe of everyone of us who has survived this worst betrayal of body and trust, and will celebrate and rejoice in each life saved. I  believe that everyone should be empowered  to “soar” above their abusers, and take back their lives. I am   proud to be part of “Survivors Voice Europe” and  will shout for  justice until my  last breath.  ENOUGH!”

“I was 13 years old when my parents entered me into the  boarding school “Eymard-Ville” in Stevensbeek. It was here that I was sexually abused over a period of time by father Piet Wouters of the Congregation of the Blessed Sacrament after an accident at school. It took me 37 years to realise how violent that had been, that I had hidden this all this time from  others, but also from  myself! I never made the connection, while hearing about pedophilia or watching a film which made me cry; it was covered, deeply tucked  away, because it was just too big to deal with. Also I never realised that my fear of losing everything I had achieved was coming from the fact that the rector of the school had told me that I was a bad and dirty person for seducing my educator. So I didn’t think I deserved it…

After trying for months to untangle the knots of my life: ‘what is mine and what is the result of what happened to me?’, I started my therapy with psychodrama therapist Peter John Schouten. The request for help had become quiet simple: ‘Help me to accept and love the person I have become’. After one emotional and disturbing year we managed just that…and still there remained the anger, not towards the priest who abused me,  as I can eventually forgive him, but the church authorities who had put their own ‘good name’ and ‘respectability’ above the safe -guarding of the child that was put under their care.

During 2003 and 2004 I fought my case at the Catholic investigative commission “Hulp en Recht”, resulting in Wouters being ‘convicted’, which did not stop the congregation from promoting him 1 year later to consultor of the congregation. It was then that I decided that I had taken enough injustice and became an activist, a Survivor, no  longer to be pushed aside or ignored.”
In september 2007 a TV documentary was made about my case against the church, but it was too early: the general public and the media were not yet ready to see the global and systematic cover-up of the Vatican.

I was a founding board member of the non-profit foundation “Mannenhulpverlening na Seksueel Misbruik” supplying information and maintaining a social network for male sexual abuse victims organising support meetings for survivors.

When I heard of the initiative of Bernie McDaid and Gary Bergeron in April 2010  to organise a meeting of survivors in Rome I felt immediately ‘at home’ and I am proud to have stood on “Reformation Day” October 31, 2010 facing the Vatican with other Survivors. It was there that Sue and I met for the first time and decided the foundation of Survivors Voice Europe.”

In the early spring of 2002 Bernie  McDaid became one of the first survivors of clergy sexual abuse to come forward in Boston, the epicenter of clergy sexual abuse. He became the first profiled victim, stating his full name in a May article in the Boston Globe; when most people were still looking up the word pedophilia in the dictionary. His ground breaking story depicted a troubled youth and the life of an abused victim; paving the way for more survivors to come forward. In 1969, as an adolescent, Bernie and three of his classmates went for help to his father who had the perpetrator removed from the parish but not before the unknowing parishioners threw him a going away party and not until four months after his father sought help from a priest and not until the ordination month of February when all the new priests entered the parishes and Father Joseph Birmingham left St. James in Salem Ma. to St. Michael’s in Lowell. The betrayal angered the boy and was never forgotten.

In April of 2008 in Washington D.C., McDaid received his apology, becoming the first victim of clergy sexual abuse to speak to the head of St.Peter’s Church; warning Pope Benedict that he has a cancer in his flock and his church needs to change.
His heart felt plea apparently fell on deaf ears.

Gary Bergeron is 48 years old and lives in the  greater Boston area. A carpenter by trade, Gary, along with his brother came forward to his parents about his abuse at the hands of Rev. Joseph Birmingham, in March of 2002. Within 3 months, more than 55 survivors of abuse from the very same priest came forward. The following month Gary’s 78 year old father revealed to his son that he had also been sexually abused as a child, by a priest. Vowing that “There will never be another child named Bergeron abused again”, Gary began publicly sharing his story and publicly speaking out about clergy sexual abuse.

Gary helped organize the only public event in which the former archbishop of Boston, Cardinal Bernard Law, met with survivors and family members shortly before his resignation. In March of 2003, Gary along with his father and Bernie McDaid, traveled to the Vatican hoping to meet with Pope John Paul II. After securing a meeting with several Vatican officials, they met with the Vatican Secretary of State and became the first survivors of clergy abuse to be officially recognized by the Vatican. Gary has been interviewed on radio and television both in the US and abroad. He is the author of “Don’t Call Me A Victim” Faith, Hope & Sexual Abuse in the Catholic Church.